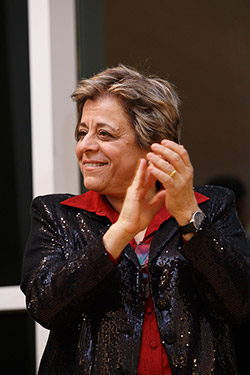 ADA PELLEG, conductor
Israeli conductor Ada Pelleg, Music director of the Galilee Music Center is an inspiring and powerful voice on the Israeli music scene who passionately believes in music as a vehicle for bringing the different ethnic groups of Israel together. The innovative concert series “Mostly Mozart in the Galilee”, which she initiated has already become synonymous with excellence, and has an impressive subscribers’ list. Through her musical activities in the Galilee, Pelleg opened unique venues to the music- loving public, among them the Maronite Churches in Gush Halav and Nazareth, and the auditorium in Stef Vertheimer’s new Industrial Park in Nazareth.

A prolific writer and sought after lecturer, Pelleg has published numerous articles in professional publications and has lectured in prestigious institutions, including the School of Architecture at the Israel Institute of Technology, London University SOAS, Middlebury College, Haifa University and Indiana University. In 2006 she conducted her own arrangement to Pink Floyd's The Wall, for a rock band, choir, and orchestra. Most recently she completed the Hebrew translation to Histoire du Soldat by the Swiss Librettist Ferdinand Ramos, set to music by Igor Stravinsky, and conducted a special performance with the participation of actors and players of the Israel Philharmonic. Her current series of program on Israel’s Voice of Music Radio titled “Dialogue with God” is gaining great success.

Pelleg graduated with distinction from the Chicago Music College (BA in piano performance), and from the Indiana School of Music in Bloomington (composition and theory).Her principal conducting teacher was Maestro Henry Mazer, Associate Conductor of the Chicago Symphony who described her as “the most promising talented I have encountered”.

She was awarded numerous fellowships and awards, among them a conducting fellowship to the Aspen Music Festival, a conducting scholarship to the Peabody Conservatory in Baltimore and a fellowship to a master class with Max Rudolph at the Curtis Institute of Music in Philadelphia. She received First Prize in the Molly Margolis Piano Competition in Chicago as well as other scholarships and distinctions. The I

sraeli Association of women in Management chose Ada Pelleg as "Woman of the year 2006".